Jaguar Land Rover Hackathon is an annual business idea competition, bringing together some of the best developers and business analysts from all around the UK. It is held since 2002 and is backed by the well-known car manufacturer.

The idea behind the contest is that cars are more than mere mechanical objects – they are a part of the increasingly all-encompassing Internet of Things. This year contest was aimed at new, feasible ideas of using modern connectivity technologies that would allow even deeper integration of the car into our everyday lives. This could be achieved by changing its function from the source of mobility to a comfortable mobile control center for our lives.
We appreciated the fact that we have been invited to take up this challenge.

The contest took place in Coventry, the heart of British motorized vehicles business through the first half of XX century. The venue was held, very appropriately, in the Transport Museum. We were free to join exhibitions during the day and wander around the museum at night. It really added some spiritual element into the atmosphere of this challenge, placing it in the context of works of 20th Century great inventors. The magic was in the air, along with the smell of old engines.

We were welcomed at 7pm with a dinner and a few speeches about ongoing innovation processes at Jaguar Land Rover, which were really nice to hear. Extensive talk about the idea of a connected car took place. A car which is a full-fledged member of the Internet of Things.

After dinner, there was an introduction to available tools and equipment, which was massive. From soldering stations, through Arduino controllers and Raspberry Pi microcomputers, we had access to all of it, as well as the parts of Jaguar and… the Jaguar itself. This was one of the most impressive parts of this gathering as we’ve been given access to the most advanced car made by Jaguar.

Then the idea pitching went through. Each team-leader-to-be gave a pitch on his or her idea, in order to acquire the best developers on the premises. It was a rule that everyone has five minutes sharp for the presentation. Different ideas were presented during this part of the event; some were well prepared and designed to be worked on, some of them not so. When they were done, the noise went up. People started to buzz around looking for properly skilled teammates. The intensity of networking was quite profound, and I must admit that developers were in demand. Finally, we have chosen a team to join – our decision was based mostly on the leader’s idea that we found interesting, and also on the teammates’ presentation skills. The project was about recognizing driver’s emotional state and making the car react appropriately to keep the driver happy. The project focused on driver’s security – e.g. if he or she suddenly felt unwell so much, that it would significantly increase risks of driving a car.

At 11pm the coding commenced. All teams gathered at their desks exchanging ideas, topics, ways to implement them, figuring out which bits of the project are the worthiest of showing. As the time passed, our ideas on expressing thoughts began to crystallize. Maciej successfully integrated facial expression recognition library. We had that working on 2am of the first day. That was amazing to see an iPhone tracking facial expressions for anyone who dared to try! We went to sleep around 4am, after 24hrs of up time. It was quite an effort.

Breakfast was served at 8:30, then a coffee and getting ready for coding. The second day was all about coding and work – for coders at least. So coding went on since 9am until midnight with short breaks for lunch and dinner. Again speakers were invited to give us insight into new technologies and start-ups like what3words.

The last day was a day of rush. We had to integrate our software which consisted of 4 major parts:

In the meantime, the rest of the team prepared a pitch to deliver on final project evaluation. The final evaluation was divided into two parts: three minutes for introduction and two minutes for technical presentation, with additional time for questions – lasting as long as anyone from the audience or judges would be curious about the project and keep asking questions. 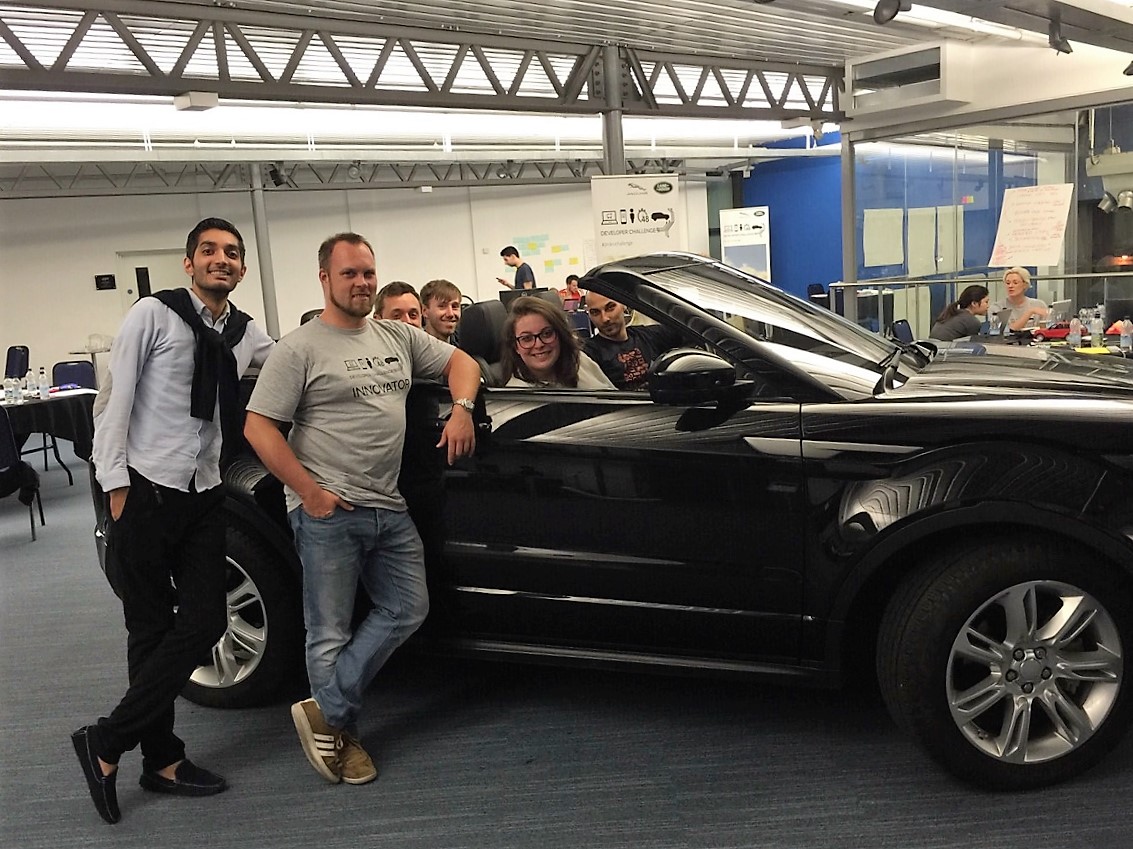 There were 10 projects to evaluate. The winner project was the system that collected information about road hazards based on readings from car sensors. This data was to be sent to the central database which created an accurate map of those hazards.

Second prize project was a system that enabled data gathered from the sensor to store in the central database for an immediate and accurate check of the car condition. The business use case was to create this database to make second-hand car purchase easier.

The audience award was given to mobile app that was a game among Jaguar drivers to compete in different categories. Mobile app gathered all data through sensors installed within Jaguar car.

Our project wasn’t among the best in this edition; however, it took the longest questioning session, accumulating the most curiosity from the judges and audience. We have gone a bit too far with our unrestrained creativity, making it too difficult to grade along the contest objective lines. This is our lesson for future events. Still, it was a great pleasure and a lot of fun and experience of creating a project with the most talented developers invited by Jaguar Land Rover, all of this at the site of twentieth-century motorization legacy.

iOS developer with experience of embedded systems programming. Programming Raspberry Pi with Swift to achieve various goals. When not programming, is usually learning a new sport.