If you are a business owner rather than a software developer there is a good chance you don’t know what is so fantastic about PWA.

Before I explain, let us travel back in time to better understand where we are now in the Internet business. When I started learning HTML and CSS there were only static websites. JavaScript was mainly used to display annoying alerts and prompts. After a while, websites started to become more “dynamic” by allowing users to have more interactions – user profiles, comments, and of course buying things within the browser were introduced. In 2008, Apple’s App Store ignited a mobile revolution and we started to enjoy native mobile applications. We all liked the smooth transitions between pages, speed, and better offline experience that native apps offered. But browsers were not that far from that. HTML5 introduced a lot of cool things that allowed us to create a native-like experience within the browsers. Everyone started to build Single Page Applications (SPA) extensively thanks to History API and CSS3 Animations. At this point, the word “Website” became obsolete. “Web App” was born to soon rule the world.

And here we are in 2018, creating web apps on a daily basis. Why? I asked one of our clients, who already had a native mobile app on iOS and Android but still wanted us to create a mobile web app with a similar look and feel, why that is. The answer was simple — around 60-70 percent of the traffic they have comes from mobile browsers. And users did not want to download and install a native app unless they felt they would use it every day. There are even more advantages of web apps:

And these points are valid for every web app.

Let us try to uncover what we mean by “Progressive”. The term “Progressive Web App” was introduced in 2015 by Frances Berriman and Google Chrome engineer Alex Russell. It was used to describe web apps that use new features supported by modern browsers, like service workers and web app manifests. PWAs offer a few advantages over traditional web apps.

1. Performance as the key benefit

The most important thing about PWAs is that they should be built with the progressive enhancement strategy in mind —meaning they should be responsive, fast, and connection-independent. Instead of showing users a blank screen while the app is still loading, we can provide an App Shell with minimal content. Thanks to advanced caching done by Service Workers we can specify the rules stating how a cache should work, i.e. network-first or cache-first approach. We finally have more control over how the cache works. 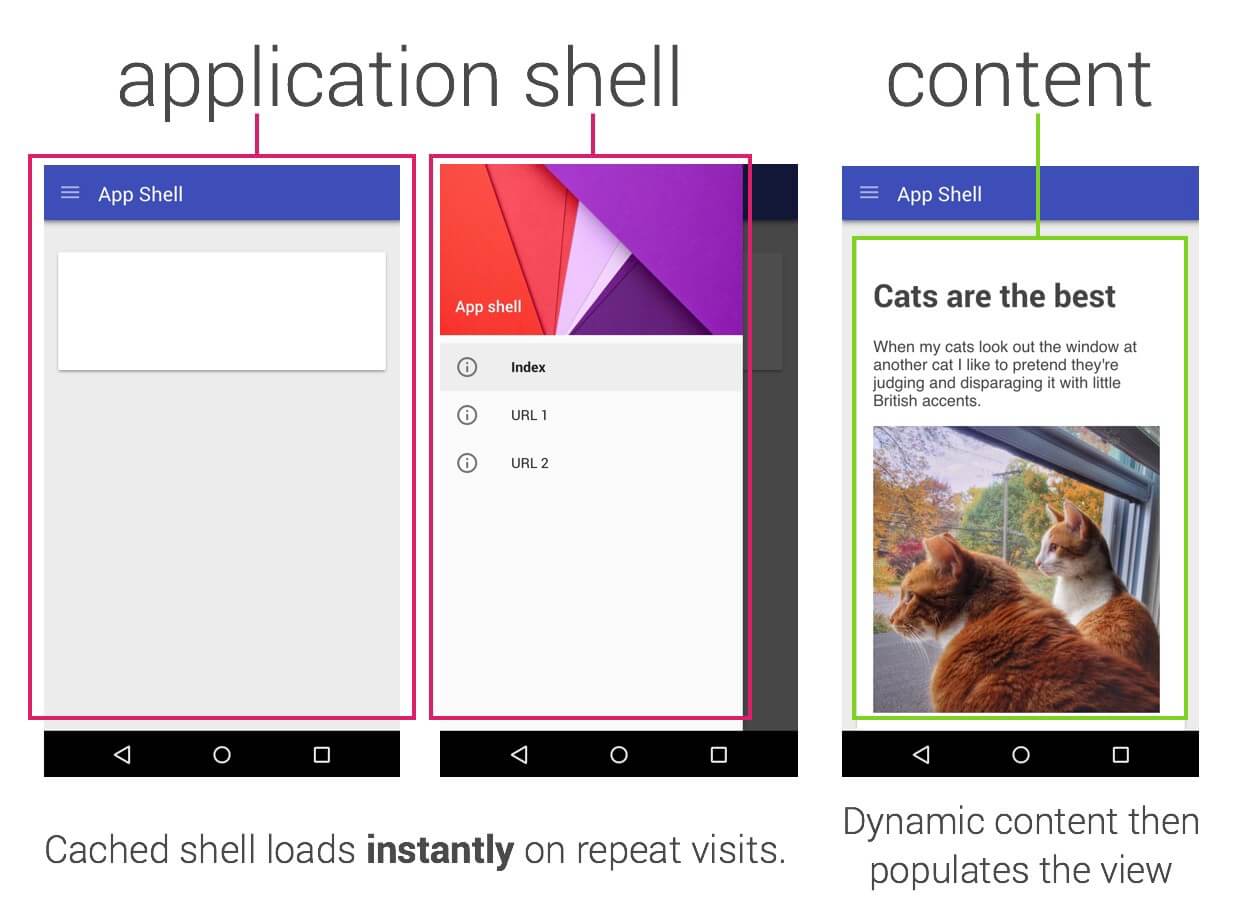 It is possible to add your app to your OS home screen and launch it in full screen. No need to open a browser and type in the URL by hand anymore

What else can web apps do today?

The list is long and probably covers most use cases. To get the full picture, you can simply open https://whatwebcando.today/ and check what your browser can do when it comes to using native OS features.

3. Be safe when surfing

Every page has to be served over HTTPS, which is good for a few reasons:

4. Offline use instead of T-Rex

Who does not like the famous offline T-Rex from Chrome? Turns out people are more in favour of a usable application instead of our good little friend (at least to some extent). Thanks to Service Workers, we are able to display content that the user has already seen. What would be the use of downloading it again anyway, right? 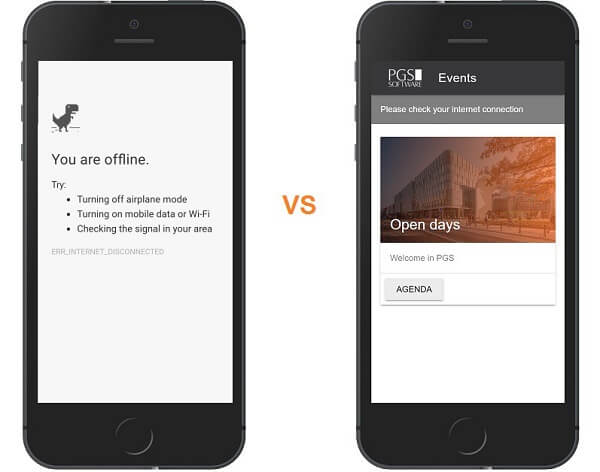 As a result of high performance, engaging, native-like experience, and the ability to work offline, we get an increased number of conversions. Users like apps that work, yet they like apps that work fast and provide the best experience even more. A number of companies have succeeded with PWA – just take a look at Google show cases to see how page companies have succeeded with PWA. I’ve decided to list three of them below:

The Twitter Lite Progressive Web App became the default mobile web experience for all users globally in April 2017, which resulted in::

Flipkart, India’s largest e-commerce site, decided to combine their web presence and native app into a Progressive Web Application, resulting in a 70% increase in conversions.

After building a PWA, the travel company Wego noticed a 26% increase in the number of users, a 95% increase in conversions on Android, and a 50% increase on iOS.

Progressive Web Apps works on all modern browsers but not all of the them support every single feature. Few months ago Service Workers in Safari were still under development but today they are already in testing so we can expect them to be available soon. For now Chrome users will get most of the fun of PWA but also iOS users benefit from better performance and native-like experience. AliExpress saw 82% increase in iOS conversion rate after building a PWA. There is something for Windows users too — soon PWAs will be available in Windows Store like any other native desktop applications.

It is clear that building a PWA is a no-brainer in most cases. If you really need access to low-level OS features and have resources you should probably still build separate native apps for iOS and Android. In any other case, you should definitely consider a PWA – it will make your users happy and, as a result, it will help your business grow. 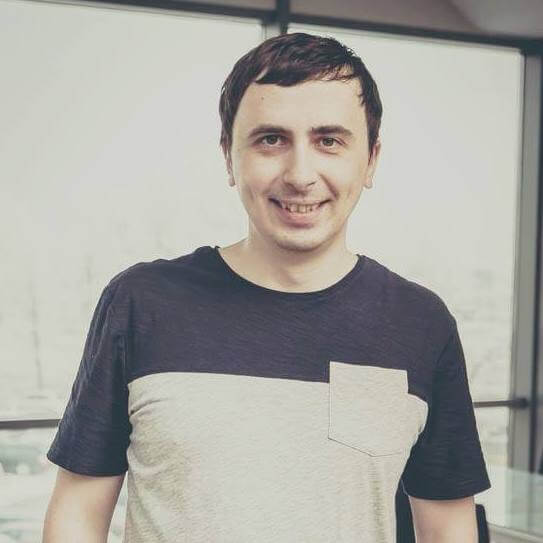 A graduate of Faculty of Electronics at Technical University of Wroclaw, author of publications concerning computer network optimization, Front-End Team Leader at PGS Software. Seasoned React developer, a fan of optimization and automation, a guitarist, and video games enthusiast.