We’re at the end of November – the holiday season is about to begin and soon, before you could say “Merry Christmas”, the new year will be here. For us, it is the time to look into our rear viewmirror and see what has happened to PGS Software over the last year. If you want to have an exclusive peek at some of our internal data, look no further. After all, it’s the season of sharing!

Disclaimer: all of the information supplied does not include December, so it’s based on 11 months of activity.

The first thing that struck us when we’ve made a summary of all the projects we worked on in 2013 was the sheer number of them – 330! How is that possible, considering we had just over 700 projects in the history of our company? The answer is quite simple. Many of our long-time partners are still with us and we continue to update and service their platforms. In fact, out of those 330 projects less than a half were brand new enterprises that started in 2013. Over 170 were projects from previous years that still remain active. Some of them kicked off as long as 7 years ago.

We believe this is very important. A great service means we not only get new clients each year. It also means that our partners are not here just for a single job – they stay with us afterwards, boosting the long-term growth of the company.

But the number of new work is also growing. In 2012 we have started 83 new projects. In 2013 the number almost doubled to 143! And that’s probably what every single developer in PGS Software could have seen coming – we’ve been adding new teams and offices at a steady rate throughout the entire year.

But let’s not make it about business stuff only. Let’s look at the thing we’re all passionate about – the technology.

Here’s a breakdown of primary technologies for all projects we have worked on this year. 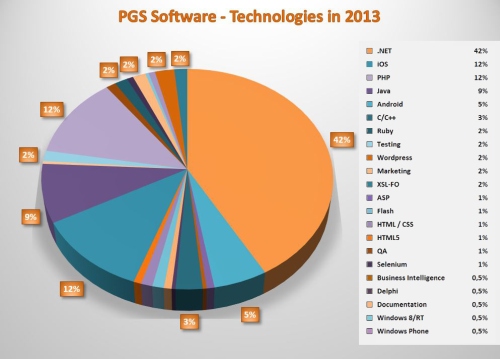 Though we did some work in interesting, smaller techs like Ruby, Selenium or XSL-FO, the bulk of our effort was .NET development. PHP, as you’d expect, is a close third with Java trailing slightly behind. Web applications remain to be a strong point in our portfolio.

It’s interesting to note that when it comes down to specific programming languages our data is not far off from the TIOBE popularity index stats. Perhaps, due to a growing sample rate, PGS Software looks more and more like a miniature of the entire software market…

As far as the mobile environments go, most of our work was focused on various iOS apps (12%), though Android remains a large and growing part of our projects (up to almost 5%). And while the number of Windows Phone apps was negligible, they have allowed us to gather valuable experience. Should WP become more important in the coming years, we have the people and know-how to quickly expand in this direction as well.

The last bit? Intangibles: consulting, marketing, technical documentation, business intelligence. Together they constitute under 3% of our workload. It shows you that PGS Software is almost entirely focussed on “hard” skills: software engineering and development work. After all, we’re good at it, and we believe this specialization is why our partners value us so high. For everything other than programming we like to reach for top-notch outside competence, such as our Goldenberry consulting partners.

Without our clients there would be no projects and no technologies to speak of. So, where do they come from? Who are they?

While I’d love to tell you, many of our partners remain confidential. Some well-known companies we work for do not wish to be mentioned and we fully respect that. What we can share – though – is the country breakdown of our client base. 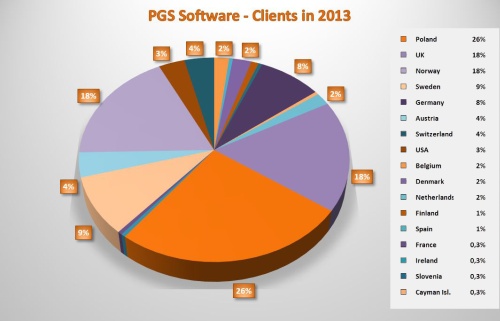 As you can see, Poland seems to be in the lead.  The thing is, “Poland” doesn’t always mean Polish companies. Quite a lot of those are actually Polish branches of many world-wide businesses. Entirely Polish clients remain a minority group for us. And what about other countries? PGS Software currently seems to have close ties with most of the north-western Europe, including: UK (18%), Norway (18%), Sweden (9%), and Germany (8%). This is a good market to be in, though we’re still trying to diversify our global reach. We are always happy to host clients from even the furthest of places, like Australia or Cayman Islands.

Just as I mentioned in the beginning, we now start to think more and more about the upcoming holidays – traditionally a very important time in Poland. Some of our clients are coming down here in December to celebrate various achievements, and some of our developers are already planning their well-earned leave.

But one thing is certain. We’ll all be back in January, trying to beat our 2013 score, as imposing as it may seem today.