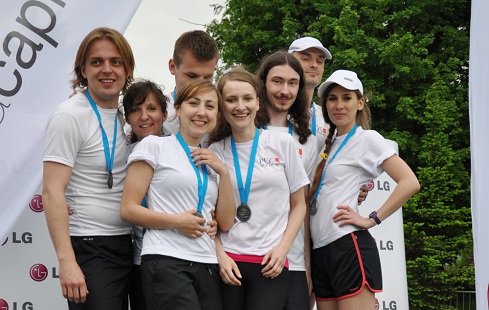 Although our daily job is to race in software programming championships, we are more than happy to reach for the gold in other disciplines – especially when we can help someone. No wonder we decided to take part in a charity relay run on May 18, to support raising money for the treatment of a 4-year-old Alicja from Wrocław.

The race was a spontaneously organized charity event aimed at sponsoring a serious medical surgery and a lengthy rehabilitation that Alicja has to undergo to have her right leg saved. All Wrocław’s major companies were invited to join the event and a majority of them submitted their representations. The competition took form of a 4×4 km relay race – each team member had to run a round of 4 km before passing the baton on to the next person. The organizers charged every company a fixed sum per contestant – all for the sake of Alicja.

Deeply moved by the case of Alicja, we decided to support the initiative. The number of competitors exceeded everybody’s expectations by far – nearly 1000 people started off in the run! PGS Software’s representation included an all-male team Run PGS Software and a girlsband PGS Software Starlets. Our team members, although diversified as regards their preparation level and predispositions, did their best and were proud to cross the final line, but most of all – they had lots of fun.

All day, we were high-spirited and fuelled by positive energy. First things first: we discussed the most efficient ways to pass on the baton. Then, believe it or not, two of our male team representatives were brave enough to join the girls in fitness/aerobic warm-up. Some of the bravest went even as far as Yoga-inspired stretching. All this to be well-prepared and enjoy the run. And we did – the race route run across one of the loveliest Wrocław’s park, famous for its picturesque corners. Having completed the distance, all of us were decorated with medals of honour and we were free to sit by the table and share a meal.

Our team spirit made us feel like winners although we were not the first to reach the finishing line. We hope that the Warsaw edition of the run will be equally popular and will help finalize the fund-raising for little Alicja’s surgery.